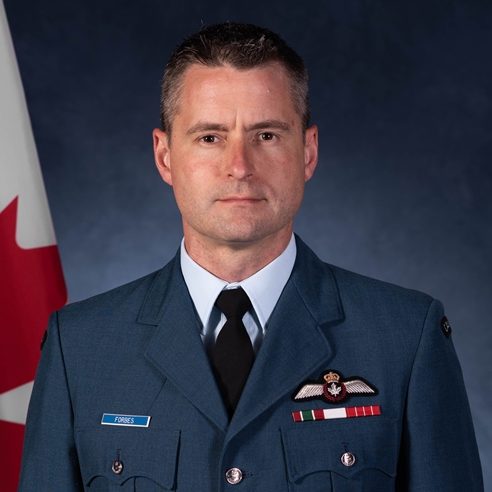 LCol David Forbes was raised in Southern Ontario where his extended family still resides.  At the age of twelve, he joined the Royal Canadian Air Cadets earning his Glider and Private Pilots’ Licenses.  Having joined the Canadian Forces in 1997, LCol Forbes left home to attend the Royal Military College, graduating in 2001.  Owing to a two-year delay for pilot training, he was allowed to travel to Queensland Australia to complete a Master’s Degree in International Relations.

Upon his return, LCol Forbes completed pilot training, was selected to fly Griffon Tactical Helicopters, and began serving with 427 Special Operations Aviation Squadron in 2004.  In the spring of 2010, he deployed as part of Canada’s Special Operations Task Force to Kandahar, Afghanistan flying Russian-built Mi-17 Hip helicopters conducting operations against the Taliban.

Immediately following this deployment, LCol Forbes was posted to 1 Wing HQ, Kingston, as the A5 Plans Officer tasked with the integration of the new CH147F Chinook helicopter into 1 Wing; restructuring the whole of the Tactical Aviation Enterprise in the process.

LCol Forbes was then posted to 408 Tactical Helicopter Squadron during a busy and extended high-readiness period; first as the Operations Officer and later as a Flight Commander.  In November 2013, he deployed to the Philippines on Operation RENAISSANCE-13 as the helicopter detachment commander as part of Canada’s humanitarian response to Super-Typhoon HAIYAN; the most powerful storm ever recorded.

Following Command and Staff College, LCol Forbes spent one year working on the Strong-Secure-Engaged defence policy for the Chief of Force Development in Ottawa and two years as the Senior Staff Officer for Tactical Aviation at 1 Canadian Air Division Headquarters in Winnipeg.

LCol Forbes holds a Bachelor’s Degree in History and Politics from the Royal military College of Canada, two Masters Degrees, and a college diploma in aircraft mechanics.  LCol Forbes is a graduate of the Canadian Army Staff College in Kingston and of the Canadian Armed Forces’ Joint Command and Staff Program in Toronto.

LCol Forbes’ wife, Terry, is a Social Worker at the Stollery Children’s Hospital in Edmonton and he has a grown step-son in Saskatoon.  He spends his spare time hiking and camping with his wife and dog, tinkering on mechanical projects in the garage, and flying and maintaining light aircraft