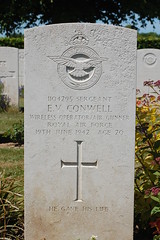 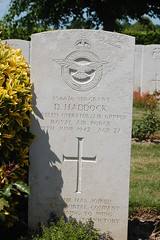 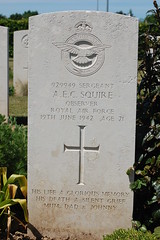 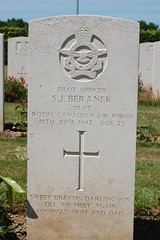 Whilst carrying out Gardening (Mine Laying) operations in the Artichokes (Lorient) Region, Hampden AT189, EQ-G, crashed in a field, near Servel, Northern France. The remains of P/O Beranek (Pilot), Sgt Squire (Navigator), Sgt Conwell (WAG) and Sgt Haddock (WAG) were recovered and they were laid to rest at the BayeuxWarCemetery in Bayeux, France. 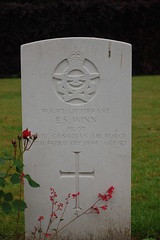 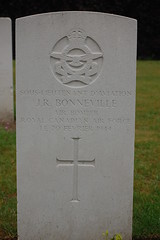 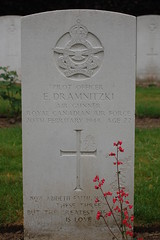 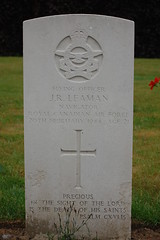 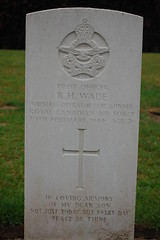 F/L Winn and crew failed to return from a raid on Leipzig, flying in Lancaster II  LL720,  EQ-R. This was one of four 408 Sqn Lancasters that were lost on this raid.

The other Air Gunner, T/Sgt Brown of the USAAF, was re- interred at the US Military Cemetery at Neuville-En-Condroz, Belgium. 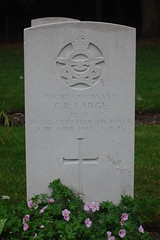 F/O G. Large and his crew were originally shot down by a night-fighter while flying in Halifax II JB790, EQ-V, crashing at Sellen, Germany.  Two of his, F/L Milburn (A/B) and Sgt Leith-Ross (FEng) were killed while the surviving crew members, F/O Large (Pilot), Sgt Rayment (Navigator), Sgt Bainblatt (WAG), Sgt Forest (AG) and Sgt Hutchinson (AG) were interned as POWs.  F/O Large was later killed on 16April 1945 when Allied fighters strafed a POW column he was marching in. He is buried in the Canadian War Cemetery at Adegem, Belgium. 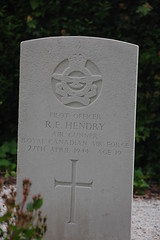 Lancaster II DS719, EQ-D flown by F/O Rognan and his crew failed to return from a night raid on Essen after crashing in the Oosterschelde off Wissenkerke (Zeeland) on Beveland.  The entire crew was killed but not all of their remains were recovered.  Sgt Gilbert (FEng) is buried in the Bergen-Op-ZoomWarCemetery, Bergen-op-Zoom, Netherlands.  P/O Hendry (AG) is buried in the Wissenkerke GeneralCemetery, Wissenkerke, Netherlands.

The body of 1st Lt Shove USAAF (Navigator)  was recovered and his remains were repatriated to his home state of Connecticut, by way of Wissenkerke and the US Military Cemetery At Margraten. 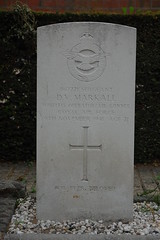 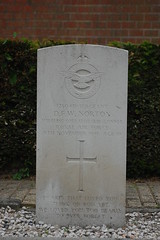 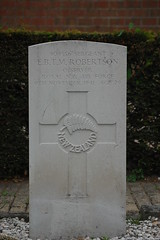 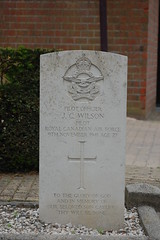 Whilst carrying out night operations bombing the docks outside of Ostende, Hampden AE438 (EQ-N) was shot down by flak and crashed near Roksem Belgium.  The crew, consisting of P/O Wilson (Pilot), P/O Robertson (Navigator), Sgt Norton (WAG) and Sgt Markall were all killed in the crash.  All four are buried in the Westkerke Churchyard, Oudenburg, West-Vlaanderen, Belgium.