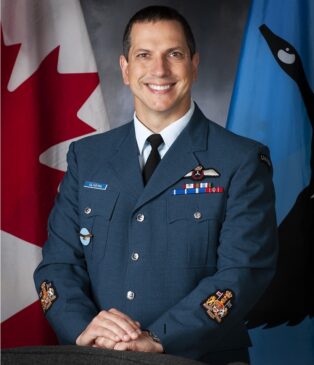 Chief Warrant Officer (CWO) Carlos Oliveira was born in Toronto, Ontario and joined the Canadian Armed Forces in 1991 as a reserve Airframe Technician. Following basic trades training, he worked on the CH136 Kiowa helicopter with 2 Tactical Aviation Support Squadron (2 TASS) in Downsview, Ontario.
In 1997, he transferred to the Regular Force and was posted to 400 Squadron in Borden, Ontario as an Aviation Technician working on the CH-146 Griffon. In 2001, he deployed with Task Force Bosnia Herzegovina, on Op PALLDIUM, attached to 408 Sqn helicopter detachment as the AMCRO 2IC.
Promoted to Master Corporal (MCpl) in 2002, CWO Oliveira became 400 Sqn ALSE shop supervisor. In 2003, he did a voluntary occupational transfer to Flight Engineer. Upon completion of training, he was posted to 427 Sqn in Petawawa flying the CH-146 Griffon.
In 2006, CWO Oliveira returned to 400 Sqn where he served for six years. During his time at 400 Sqn, he participated in numerous exercises and deployments such as, Ex Maple Resolve, Op Hurricane, JTF Games and Op LENTUS. In 2007, he was once again promoted to MCpl.
CWO Oliveira became a Flight Instructor (IFE) in 2008 and was employed at the Operational Training Flight (OTF), teaching new Flight Engineers the basic skill needed to fly on the CH-146 Griffon. Promoted to Sergeant (Sgt) in 2010, he continued to be employed as the Unit Standards Flight Engineer, a position he held until 2012.
In 2012, CWO Oliveira was posted to 408 Sqn Edmonton assuming the role of A Flight Lead (Flt Ld). In 2013, he became the B Flt WO. Employed also as the Unit General Safety Officer during this time, he revamped the general safety program. In addition, he helped the Sqn acquire new mission kits that are still used today.
Promoted to Warrant Officer (WO) in 2015, he was employed several times as Det WO, RIMPAC 2016, EX Maple Resolve 16 and 17. From October 2017 until May 2018, he was deployed on Op IMPACT, Erbil, Iraq as the Tactical Aviation Detachment Sergeant Major.
Promoted to Master Warrant Officer (MWO) in 2018, he was posted unaccompanied to 1 CAD HQ, Winnipeg as the Tac Avn Staff Officer Readiness. While in Winnipeg, he worked on the Tactical Aviation Door Gunnery course, Door Gunners flying specialty badge and pilot mountain flying course contract.
In 2019, he returned to 408 Sqn assuming the role as HQ Flt WO and Senior Flight Engineer.
CWO Oliveira was promoted to his current rank in 2022and was appointed as 408 Sqn CWO.
During his flying career, CWO Oliveira has accumulated over 3,400 hours on the Griffon Helicopter.
Married to Correna Craig, they have one daughter, Ashley Oliveira, and a one-and-a-half-year-old dog, Evie. CWO Oliveira has a great passion for soccer, both playing and coaching, and he loves to travel.